The female students of Ugnorikoko secondary school, Warri, have been charged to uphold their dignity and stand out in their academic pursuit in the contemporary Nigerian society.

Mrs. Rachael Misan-Ruppee, Executive Director of Development Initiative for Community Impact (DICI), gave the counsel on Friday, 11th October, 2019, at the school hall, when DICI celebrated this year’s International Day of Girl Child with the female students of the school. She said that the theme of this year’s International Day of Girl Child: “#Girl Force – Unscripted & Unstoppable,” was aimed to enhancing the potentials of the girl child towards achieving their goals in the society. She stated that Ugborikoko secondary school was chosen for the celebration of the annual event in order to raise awareness about the importance of the Girl Child and making them a formidable voice in advancing the growth of humanity.

Continuing, she told the enthusiastic female students that the International Day of the Girl Child aims to promote the values of the girl child and equip them with the right information and training they will rely upon in dousing the challenges being posed before them in the society.

“You have begun the journey to achieving your future career, therefore, it is imperative you acquire the right training and character that will catapult you to stardom in the days ahead,” she stated. 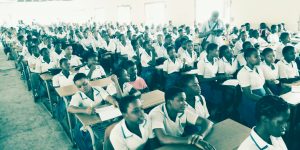 The event also featured the promotion of regular handwashing in schools, with a rider:  “Wins” (Wash in Schools). It was an exposition that emphasized health benefits of proper hygiene and sanitation.

In his presentation, the Programme Coordinator at PIND, Mr. John Nwamuo, enlightened the students about the importance of regular washing of hands in promoting good health. 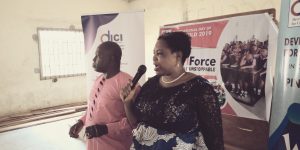 Mrs. Rachael Misan-Ruppee of DICI, and Mr. John Nwanmuo of PIND, speaking to the female students of Ugborikoko Secondary School

He said: “I am here today to tell you the importance of regular washing of hands to enable you live a healthy life. I encourage you to make handwashing part of your everyday life. There is the popular saying that ‘when you train a girl child, you train a nation’ which buttresses what I am doing now by educating you on the benefits of handwashing.

“The truth is, the girl child is very important in the home because she does the cooking. Meaning, if she does not wash her hands properly before cooking the food, it will not be safe for eating. Therefore, you can help yourselves, your loved ones and families stay healthy by washing your hands often, especially during these key times – before, during, and after preparing food, before eating food, and after using the toilet.” 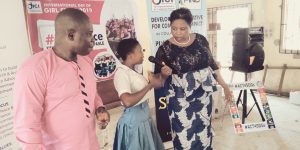 A female student of Ugborikoko Secondary School, at an interactive segment of the event

Continuing, Nwamuo, demonstrated the use of “tippy-tap”, an improvised and easy method of washing hands in schools, public places and  homes, emphasing use of soap and water to be able to wash hands clean. He charged the female students to take the enlightenment home to ensure their brothers, sisters, fathers and mothers maintain proper hygiene.

The students thanked DICI and PIND for marking this year’s International Day for Girl Child at Ugborikoko secondary school.

The duo of Martha Ebiarede, and Ugochukwu Victory, SS3, and SS2 Social Science students who won prizes for answering questions correctly at the session, said: “the theme of the programme is a wake up call to the female students, and we are strongly motivated to aspire to greater height in the society. We are emboldened by the popular saying – when you train the girl child, you train a nation.” 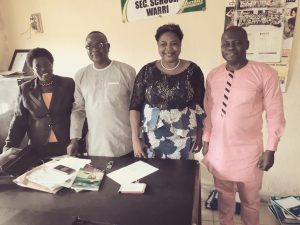 Briefing the principal of the school, Mr. Omatuyinle Olorunsho, on the importance of the International Day of Girl Child, Mrs. Rachael Misan-Ruppee, said: “the theme of this year’s celebration encourages the girl child to be the best she wants to be in the society, and it emphasizes that the parents would not force their will on her.”

Referring to the girl child, Ruppee said: “she should not be scripted; she is not a movie people watch, neither is she a script that is being acted.”

In the same vein, the Programme Coordinator at PIND, Mr. John Nwamuo, stressed the compelling need to enhance handwashing culture in the school, saying: “we encourage schools to form Wash Clubs to popularize handwashing among the students, with support from PIND.” Nwamuo added that  more enlightenment and training sessions would be organised at the school to get the teachers fully involved in the programme.

In his response, the principal of the school, Mr. Omatuyine Olorunsho, expressed delight that Ugborikoko secondary school was chosen for the laudable programme.

His words: “we are highly elated that out of the sixteen secondary schools in Uvwie Local Goveremt Area, we were lucky to be chosen for this programme. No doubts, the theme of the programme aptly brings to fore the global clamour for gender equality and jettisoning of skewed ideologies and cultural barriers limiting the girl child from attaining her dreams. 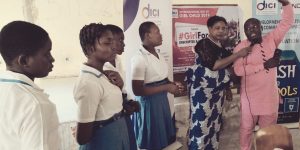 Some female students of Ugborikoko Secondary, at a discussion segment of the event

“It is a commendable enlightenment session that will go a long way to helping the girl child get to the peak of her career. Even when the funds are not available, I do know the NGOs doing this today, will be able to advance the girl child education.”

On the academic performance of Ugborikoko secondary school, the principal said that the school has had a new educational tone over the past years, saying: “we have attained a very high standard in academic work; the students are now very disciplined, academically sound and very ready to learn. We have created a conducive environment for learning and our dedicated teachers are doing a great job keep the standard going.”

On infrastructure, the principal identified some challenges, even as he commended the Delta State government for giving attention to the education sector. He called on private organisations to partner with the government to tackle the challenges in the sector. 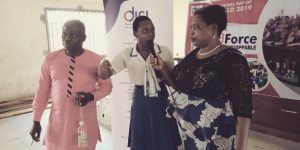 A female student of Ugborikoko Secondary School, explaining a point at the event