Trending
You are at:Home»News»Delta Farmers Applaud Agric Ministry for Distribution of Hybrid Cassava Cuttings, As ENVIRUMEDIC Charges Delta Govt To Do More 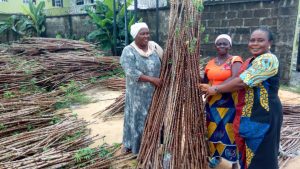 Beneficiaries of the hybrid cassava cuttings

Farmers in Delta State, and other stakeholders in the Agriculture sector of the state’s economy, have applauded the Delta State Ministry of Agriculture for distributing hybrid cassava cuttings to farmers in the state in a bid to boosting productivity in the sector and improving food security.

Reacting to the development, the Environmental and Rural Mediation Centre (ENVIRUMEDIC), a foremost nongovernmental organisation, raising the bar in environmental protection, rural areas development and sustainable growth in Nigeria agriculture sector, commended the Delta State Ministry of Agriculture for the initiative, describing it as a progressive step to revive the dwindling cassava production in the past years. It said, “the policy is in line with the state government’s determination to boost food production and accelerate agro-economic activities along the agriculture value chain.

“The initiative is a giant stride that presents huge benefit to the farmers and the state in general. It is a wakeup call for Smallholder Women Farmers Network (SHOWFAN) and the entire farmers in the state to improve production of cassava in the coming years and grow their income exponentially.”

The distribution of the cassava cuttings was reportedly being carried out by the office of the Programme Manager of the Delta State Agricultural and Rural Development Authority (DARDA) as farmers across the state, including the Smallholder Women Farmers received the cassava cuttings.

The exercise, it was reported, has recorded tremendous success as 10,000 bundles of cassava cuttings have so far been distributed, even as farmers in Warri had been instructed to collect their cuttings at the Delta Central ADP office, Agriculture Road, Effurun, headquarters of Uwvie Local Government Area of the state. In the same vein, cassava cuttings were reportedly being distributed to farmers in Warri North LGA as the exercise would be carried out across the state.

In a related development, the State’s Ministry of Agriculture and Natural Resources has also commenced the profiling of poultry farmers in the state in a bid to channeling resources to boost productivity in the sector. To ensure the profiling exercise is carried out holistically, the Ministry said, “poultry farmers have been advised to register with their LGAs across the state in order to make the process effective. 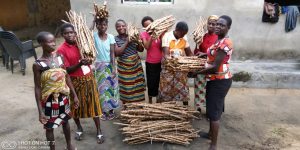 It will be recalled that ENVIRUMEDIC has been in the forefront of monitoring and evaluating government policies, programmes and activities with regard to addressing poverty in the rural communities. In carrying out these activities over time, ENVIRUMEDIC had partnered with ActioAaid Nigeria in implementation of the Local Rights Programme (LRP) and the Public Financing of Agriculture (PFA) projects.

The Executive Director of ENVIRUMEDIC, Chief Monday Itoghor noted that the “focal priorities” of the above projects, in line with the appraisal and baseline studies, include Rights to Food and Agriculture, Women’s Rights, Right to Education, Right to Health, and Climate change mitigation.

Continuing, he stressed that the PFA project seeks to strengthen the operations of farmers in Delta state, including Smallholder Women Farmers, so that they could engage effectively with duty-bearers, to ensure adequate financing of agriculture across the state. Itoghor added, “in line with the forgoing, ENVIRUMEDIC with support from ActionAid Nigeria through the PFA project mobilized, organised and formed women farmers into homogeneous clusters known as Smallholder Women Famers Network (SHOWFAN), which has been registered as a Co-operative Societies at the local level.

“The PFA project gave birth to Budget Committee Group (BCG), a coalition of Civil Society Organisations (CSOs), saddled with the responsibility of undertaking a yearly analysis of Delta State’s budget, to ascertain government funding of agriculture, specifically the Smallholders Women Farmers  (SHOWFAN), and using the findings to engage the duty bearers on behalf of the latter for a positive result.”

Continuing, Itoghor said, “the PFA project had constituted a larger body, the Small-scale Women Farmers Organization of Nigeria (SWOFON) which champions the advocacy activities of SHOWFAN at the state and national levels.”

“These bodies, SHOWFAN & SWOFON have fully constituted Executives in the State, and LGAs with membership of the SHOWFAN standing at over 6,000 across the state, “he stated. 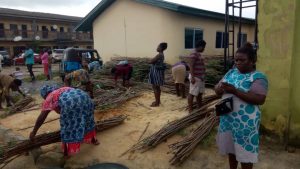 Beneficiaries of the hybrid cassava cuttings