Trending
You are at:Home»News»DICI Holds Experience Sharing and Learning Forum to Scale-up Implementation of SDGs in Delta State 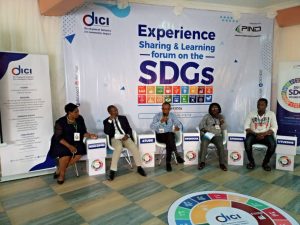 Panelists at the Experience Sharing and Learning Forum on SDGs

Presenting her welcome address, the Executive Director of DICI, Mrs. Rachael Misan-Ruppee, said the one-day forum was one of DICI’s series of programmes aimed to advance localisation and implementation of SDGs in Delta state, stating that the programme was supported by PIND (Foundation for Partnership Initiative in the Niger Delta).

“This forum is supported by PIND and offers a framework that will enable stakeholders work in a more coordinated and mutual reinforcing manner, to achieve the overall essence of the SDGs Agenda 2030,” she stated.

Participants at the Experience Sharing and Learning Forum on SDGs

Fielding questions from journalists, Analysis and Advocacy Coordinator for PIND Foundation, Oteheri Akinruntan, described the forum as a good initiative, saying that it was a practical step to raising awareness of SDGs in the Niger Delta region, noting that there is a dearth of information about SDGs among the people of the region.

Her words, “we found out that a good number of the people in the region are not aware of what SDGs are, and implementations of the SDGs are not being followed up and monitored. We see the need to provide support to programmes and activities that raise awareness of the importance of the SDGs and encourage all stakeholders to play an active role in implementation of the goals across the communities in Delta State.

“On that note, we look forward to forging partnership and advancing localisation of the SDGs in Delta state, and also inspire the people at the grassroits to start pushing for accountability from their leaders and compel them to take positive action geared to implementing the goals of the SDGs to improve the livelihood of the people. We strongly believe that when people become aware and push for implementation of the SDGs, both the government and non government actors will step up their responsibilities to accelerate developmental projects towards achieving the SDGs.”

Continuing, Akinruntan said, “we need people at the grassroots to take ownership of their today and future, and start changing their attitude to be able to drive the socioeconomic and infrastructural development of their communities to improve the wellbeing of their people. No doubts, they can do this with increased knowledge, and SDG is a great vehicle to drive the knowledge for attitudinal change.”

She stated that the overall goal of PIND is socioeconomic development, saying, “SDG is a vehicle to achieve peace and sustainable livelihood for the Niger Delta region.” 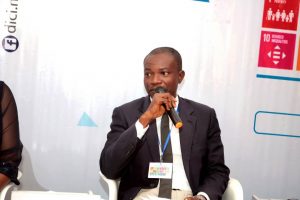 Mr. Emmanuel Atube, delivering a speech at the forum

Speaking, the representative of the Senior Special Assistant (SSA) to Governor Ifeanyi Okowa on SDGs, Mr. Emmanuel Atube, described the session as a commendable exercise.

His words, “it is a good development that this conversation has started amongst us. By virtue of this gathering, we have met with various non state actors working to achieve the SDGs, and we have identified some gaps in the implementation of the SDGs and suggested ways to address them holistically.

In the course of the discussion today, it was obvious that the implementation of the SDGs in Delta state is being underreported. It goes to saying that the state’s activities are not properly reported, and a lot of people do not know what Delta State Government is doing and how far it has gone with regard to the SDGs.

To put it in proper perspective,  there is no gainsaying the fact that a lot has been done by the state through the MDAs (Ministries, Departments and Agencies). Funnily, people seem to forget that the MDAs, in terms of their goals are part of the SDGS.

Engr. Victor German, Secretary, Warri North LGA, and other participants at the forum

Continuing, Atube said, “the programmes and policicies of governor Ifeanyi Okowa are designed to promote the SDGs. For instance, the SMART agenda embody the SDGs; Delta State is doing a lot to achieve the SDGs agenda.”

Atube charged other NGOs working in the state to take queue from the DICI organised discussion forum, and replicate it with a view to achieving the SDGs in the state.

“It is obvious that we all have a role to play to achieving the SDGs, knowing that the government cannot do it alone. Therefore, advocacy and sensitization programmes on SDGs should be the business of the state and non state actors,” Atube stated, adding that “Delta state government will key into the good suggestions made at this forum and take necesaary action towards accelerating implementation of the SDGs in the state.”

In the same vein, the Secretary, Warri North Local Government Area, Engr. Victor German, who represented the Chairman of the Council, Hon. Aduge Okorodudu, emphasized importance of the forum in achieving the SDGs across board, saying, “the meeting of stakeholders to discuss the modalities for implementing and localising the SDGs is quite commendable.” 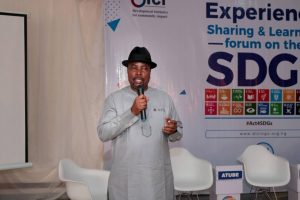 The Chairman of Egbema Gbaramatu Communities Development Foundation (EGCDF), Comr. Jude Ukori, described the forum as quite educative, saying, “it has enlightened us – critical stakeholders on the need to sensitize our people on the gains of SDGs” He emphasized increased sensitization on SDGs in the rural and riverine communities to promote active participation of the people in monitoring of the implementation of the SDGs.

In the same vein, Mr. Ovo Otarigho, Executive Director, Impact Driven Youth Leaders Initiative (IDYL Initiative), said that the SDGs consolidates on the progress that had been made during the MDG (Minillium Development Goals) era. He expressed concern about the lag in the implementation of the SDGs in Nigeria, noting that the position of Nigeria as the world’s poverty capital calls for concern.

He said, “where we are is not where we should be, in terms of implementation of the SDGs across board. Talking about the poverty index, Nigeria is now the world’s poverty capital; that means we are lagging behind in goal 1 and Goal 2 of the SDGs. In the area of health care, a lot of people die of malaria, even as children die of manultrition at alarming rate. These are frightening indices that measure our level of progress in the implementation of the SDGs over the years.

He continued, “That is not to say Nigeria has not made some efforts, but how much of the efforts has translated to saving lives in the health sector over time.” Stating further, Otarigho noted that there were records showing that a lot of primary health care centres had been built over the years, but he wondered if they actually translated to an improved health care for the people. He sued for more commitment and synergy between the government and non government actors in the iimplementation of the SDGs.

The highpoint of the event was the constitution of panel of discussants to chart a progressive way forward for unhindered implementation and localisation of the SDGs in Delta State with emphasis on Warri North and Warri South-West LGAs. Subsequently, an action plan was conceived by the participants to catalyse the implementation of SDGs across the state.

Participants at the Experience Sharing and Learning Forum on SDGs