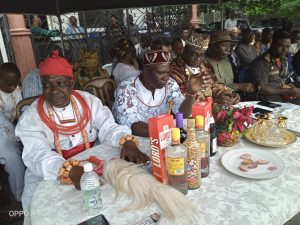 The National Chairman of the Host Communities Producing Oil and Gas in Nigeria, (HOSCON) Dr. Mike Emuh, has said that all hands would be on deck to improve the livelihoods of the oil bearing communities of Niger Delta in the coming years, adding that his administration would guarantee 100% pipeline safety, facilitate modular refinery projects and ensure gas flare money is paid to the communities being impacted by the harmful effects of gas flaring.

Emuh stated this at the inaugural meeting of HOSCON, held in Effurun, headquarters of Uvwie Local Government Area of Delta State, on Saturday 9 November, 2019.

Continuing, Emuh commended the officers and men of the HOSCON security in charge of oil and gas pipeline surveillance for their courage and commitment in carrying out the task of securing oil facilities in recent times.

His words, “I commend you for the good work you are doing in ensuring oil and gas facilities in the Niger Delta are safe. It is a thing of joy that you have shown unrivalled capacity and commitment in checkmating pipeline vandalism at critical oil installations and facilities of the OICs (International Oil Companies) and NOCs (National Oil Companies) over 2 years.”

He continued, “you all know that our ecosystem is being destroyed and our environment seriously polluted as a result of vandalism and illegal bunkering. Even as the predicaments resulting from illegal refineries and oil theft in our communities cannot be overlooked. To curb the menace, you were recruited to police oil facilities, to be informants to the Nigeria police, to be informants to the Joint Task Force (JTF), to ensure there is maximum security for the oil prospecting companies in Nigeria. For two years now, your services have been recognised and I thank you all for your good work.

Chief M.O.E Tiemo; Revd Ebide Obigha; and other dignitaries at the inaugural meeting

“I make bold to say you are one of the best paramilitary outfits in the oil and gas industry, in terms of your welfare, which include cooperative insurance, medicare, scholarship for your children and a better remuneration. Having being saddled with this task, as National Chairman of HOSCON, I stand before you with humility to promise that I will serve faithfully and deliver my services optimally,” Emuh stated.

Fielding questions from journalists, Emuh described the amalgamation of all interest groups in HOSCON and Niger Delta as a wonderful marriage and a historic exercise.

His words, “recall that when the leaders of various pressure groups in the Niger Delta including HOSCON, and other leaders of thought visited Abuja on the invitation of President Muhammadu Buhari, he strongly advised us on the need to amalgamate all interest groups, ex-militants, and other agitators in the Niger Delta including Traditional Rulers of Oil Mineral Producing Communities of Nigeria (TROMPCON). Because Mr. President has good intension for the host commumities and has shown readiness to implement the 4-point agenda, we all agreed to amalgamate to speed up development of the host communities and the Niger Delta in general. Subsequently, everybody met in Portharcourt. An Elder State’s man and Grand Patron, HRM Alfred Diete-Spiff, and other patrons were also present. At that occasion, a 31 man Executive Committee was inaugurated and charged to report back to Mr. President with details of their portfolios as representatives of Niger Delta region. Following the amalgamation, the implementation of the Gas Trust Gazette is expected to come on stream. The coming together by everybody in a peaceful accord is what Mr. President and other well meaning Nigerians want done to promote unity and peace and catalyse unhindered development of our region.

Reacting to the slow pace in bringing the modular refineries projects to fruition in the Niger Delta region, Emuh said, “it is the desire of the Federal Government to stop importation of refined petroleum products. On that note, the government wants the private sectors’ input in achieving the modular refinery initiative.”

Continuing, Emuh said, “HOSCON has begun a dialogue with foreign technical partners who are interested in financing the HOSCON conceived modular refinery and gas plant projects. Moving forward, I have set up a technical committee made up of engineers to drive the process, including committees on industrialisation and agriculture. Currently, we have got portions of land in five states donated to us for the modular refinery projects and we are working on the Environmental Impact Assessment (EIA), and other items needed by the foreign technical partners are being provided to enable them come in and start the projects. 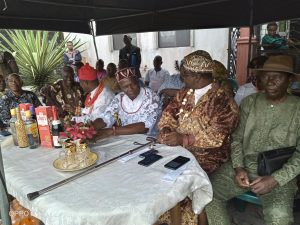 “Narraring the discrepancy in the gas flare money, Emuh said that the oil companies (IOCs and NOCs) pay compensatory fine to the Directorate of Petroleum Resources (DPR) who in turn pays the money to Central Bank where it is finally paid to the Federation account, and the money is then shared to everybody in Nigeria.

Emuh said, “the Federal Government has put a gazette in place, mandating all oil companies that flare gas to pay directly to the host communities oil and gas trust fund. This is a welcome development from Mr. President and a breakthrough for the host communities. We are happy about it, as it would trigger unprecedented industrial, economic and agricultural development in the Niger Delta, including peace and overall growth in the oil and gas industry.”

The highpoint of the meeting was creation of different committees to develop a template for actualising the developmental agenda of the Dr. Mike Emuh led HOSCON and harmonizing peace and unity among the members.