Trending
You are at:Home»News»Excitement as 5th Circle of STEP kicks-off with Orientation Workshop in Ughelli * Beneficiaries fete Gov Okowa 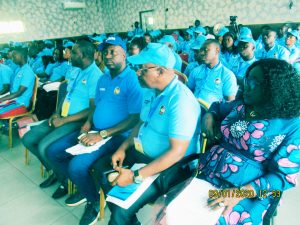 Cross Section of Resource Persons, and a crowd of Beneficiaries

As the 5th circle of the Delta State Sponsored Skills Training and Entrepreneurship Programme (STEP) kicks-off with orientation workshop across the state,  beneficiaries of the scheme who attended the workshop in Ughelli, have expressed excitement at the development, hoping to become self-employed and successful entrprenuers after the training.

The orientation workshop, which was held on Thursday 9, was attended by a capacity crowd of beneficiaries to undergo training on skills such as information technology, hair dressing & make-over including braiding, welding and fabrication, electrical and solar works, carpentry and jionery, fashion design and textile design among others. 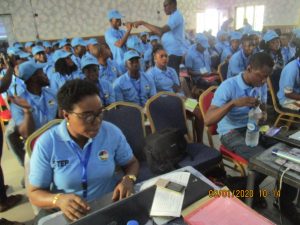 Communication Officer, Gertrude Onyekachukwu-Uteh, and cross section of beneficiaries of STEP in Ughelli

He said, “STEP is a job creation initiative and pet project of Governor Ifeanyi Okowa, designed to train, reorient, equip and motivate youths across Delta State, to acquire occupational, personal effectiveness, and entrepreneurial skills to be able to establish, run and manage business enterprises to eke out a living.

In his lecture, “Presentation of Programme Philosophy, Rules and Guidelines & Code of Conduct for Trainees,” Prof Eboh, urged the beneficiaries to take their training seriously and make good use of the skills they would acquire, even as he noted that the training would inspire creativity and build capacity to tackle unemployment headlong.

Continuing, he said that the philosophy of the Job Creation Scheme centres on creating a lasting legacy of new generation of well motivated, highly spirited, properly skilled and adequately enabled youth entrepreneurs to drive productivity and unfettered economic growth of the state.

He charged them to be committed to their training, stating that at the completion of the training, the trainees shall undergo a post-training test to  ascertain their competency, saying, “the test shall be the criterion for distribution of starter packs to you all after you have completed your training.” 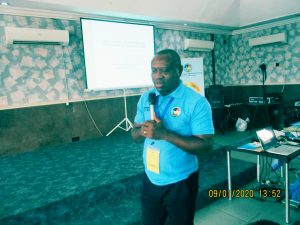 Prof Eboh, commended Governor Okowa for sustaining the job creation scheme, saying it had recorded huge success since it was launched in 2015, adding that more progress would be made in the coming years.

Pastor Afolabi Adun delivered the second lecture at the workshop entitled, “The  Right Mindset and Attitude for Skills Learning Towards Self-Employment.” He tasked the trainees on commitment and discipline in order to be successful at their training. He charged them to cultivate positive attitude at their work places, such as humility, willingness to Learn, an open mind, learning at fast rate, and a happy disposition. In the same vein, pastor Adun admonished them against negative  attitudes such as fighting, lateness to work, stealing, rudeness, gossiping, and backbiting.

Continuing, he praised Governor Ifeanyi Okowa for his unwavering commitment to building entrepreneurial capacity in the youths in a bid tacking the scourge of unemployment and inspiring self-employment.

Speaking on the topic, “Lead Yourself (Awakening & Developing the Leader in You)” Mrs. Chinemerem Omonigho, identified the qualities that underscore good leadership, even as she charged the trainees to identify their goals and go for them zealously. Continuing, she advised them to be sensitive to opportunities and make good use of them to the fullest. 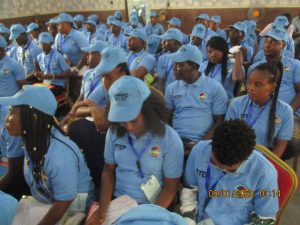 Fielding questions from journalist at the sideline of the workshop, the Executive Assistant to Governor Okowa on Youth Monitoring and Mentoring, Chief Frank Esiwo Ozue, said STEP had recorded huge success over the years. He reeled out the success story of STEP, describing the job creation scheme as a rare ingenuity of governor Ifeanyi Okowa inspired by his excellent economic blue print, the SMART Agenda. He noted that the administration of governor Ifeanyi is on the right track to stem the tide of unemployment through the job creation scheme.

Expressing delight at the workshop, the trio of Mr. Magrimor Bernard, a Catering & Confectionery trainee; Miss Akpoagbaribo Timipre and Miss Miebi Ayakurai Sarahi – Hair-dressing & Makeover, including Braiding trainees, thanked Delta State Government for giving the youths opportunities to acquire vocational skills, saying they would apply the knowledge acquired at the training to make a career and eke out a living.