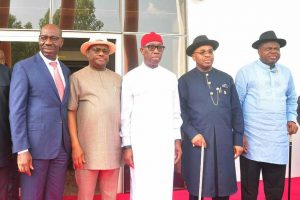 The Nigeria Union of Journalists (NUJ) Delta State Council, has described the proposed establishment of a security outfit by the South-South governors as a right step in safeguarding the people of the geopolitical zone from internal and external attacks by criminally minded elements.

In a statement of commendation made available to the press and endorsed by the Council Chairman, Michael Ikeogwu and Secretary, Churchill Oyowe, the union said the action stance indicated that the governors had listening ears and the will power to respond to the needs of their people.

The statement recalled the communiqué of the NUJ, South-South Zone at its last meeting held in Uyo, Akwa Ibom State, saying the establishing of a regional security outfit was one of the request made and thanked the governors for responding swiftly.

The statement added that the response of the governors would go down well with most stakeholders in the geopolitical zone, explaining that the security challenges facing the country were also rife in the south-south.

The union called on the various houses of assembly in the zone to complement the position of the governors by facilitating the legal frame of the proposed security outfit for the zone.

It also advocated support for the security arrangement by people of the zone, stressing the security challenges facing the people and called for a united force from all and sundry in the states making up the zone.

The statement further expressed the union’s confidence in the leadership of South South governors forum, Governor Ifeanyi Okowa of Delta State, saying the Thursday meeting of the governors in Asaba, where the decision to establish a regional security outfit was taken, was a remarkable demonstration of visionary leadership.