Trending
You are at:Home»News»Police dare NUJ, detain 3 Journalists in Warri 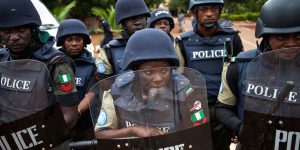 Operatives of the Nigeria Police have again hyped their disdain for journalists, as three members of the Nigerian Union of Journalists (NUJ) Warri Correspondents Chapel were on Tuesday afternoon arrested by policemen suspected to be from the Area Command, Warri.

The policemen reportedly stormed the Nigeria Union of Journalists office at Gbaiye street in Warri, at 4:30pm in a Gestapo style and arrested one of the journalists, Comrade Mathew Omonigho of Daily Trust online newspaper over an undisclosed offence and whisked him to the Area Command office, where is being detained.

The two other journalists, Mr. Edeki Igafe of News Agency of Nigeria, and Mr. Francis Sadhere of the Reformer newspaper, who had visited the police station on the directive of the leadership of the Chapel to check on their arrested colleagues were also seized and detained by the policemen for venturing to come to the police station to find out why their colleagues had been arrested.

Meanwhile, the state NUJ council Chairman Mr. Michael Ikeogwu has vehemently condemned constant harassment and detention of journalists in the state in recent times, even as he makes frantic efforts to contact the state Commissioner of Police, Mr. Hafiz Inuwa to secure release of the journalists.

It will be recalled that incidents of harassment and detention of journalists across the country by security operatives have assumed a worrisome dimension in recent times, a development many have said was unhealthy for Nigeria’s nascent democracy.