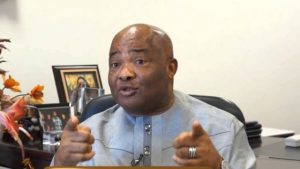 Worried about the spiraling bitter criticisms and hauling of hate speeches against the Governor Hope Uzodinma led APC government of Imo state by factious groups, a stalwart of the All Progressives Congress (APC), Hon. Anthony Nnajiuba, has called on the people of the state to shun unfounded criticisms and embrace peace in order to move the state forward.

Nnajiuba made the call recently while reacting to the barrage of verbal wars being launched against the Governor and his developmental policies since he took over the reins of governance in the state.

He said, “I am really troubled about the volume of uncouth languages and unguided speeches being spewed from the volatile crater of some quarters and orchestrated to malign governor Hope Uzodinma and distract him from implementing his people-oriented developmental policies and projects. To stem the tide of these horrendous and vindictive criticisms, I am calling on all aggrieved groups, bodies, political parties, and individuals to sheath their swords and allow unfettered peace to reign in Imo state for the good of all.”

Continuing, the business mogul, noted that the government of Imo under the headship of Governor Hope Uzodinma was on course to right many wrongs stalling the growth and development of the state, noting that the state had witnessed a lull in economic development over the years, despite the abundant human and natural resources it has in quantum.

His words, “I am constrained to lend my voice to this disturbing development in Imo state and sincerely call on my people to beat a detour from violent inclinations in order not to overheat the body polity of the state. We cannot continue to spew hate and sponsor discord, just to distract the governor from carrying out his people-oriented policies. Governor Hope Uzodinma has been a bastion of hope for the people of Imo state, since he took up the mantle of leadership on January 15, 2020.

“Against the backdrop of the urgent need for an all-round rehabilitation of infrastructure and economy of the state and providing enabling environment for the teeming youths to actualize their dreams, all hands must be on deck to preach peace this auspicious time, because we need the cooperation of everybody to make our Governor succeed in his transformation agenda.

“Let me reiterate that the administration of Governor Hope Uzodinma is on course to address the need of the people and build unity in the state, irrespective of party leaning, religious affiliation or class.

“Therefore, as good indigenes of the state, we are duty bound to give the governor our unalloyed support and wish him well in his commitment to turn the fortune of our state around. But this progress we ernestly yearn may not come to fruition if we adopt and subscribe to the PHD (Pull Him Down) agenda, and begin to throw tantrums, and haul muds at the good image of the governor, ostensibly to cause him to derail from his commitment to deliver the dividend of democracy to the good people of Imo state.”

Nnajiuba, reiterated that in an atmosphere of rancor and hate, no meaningful development would be achieved in the state.
“He said, since governor Hope Uzodinma took over the reins of governance, he has been severally vilified, castigated, and pelted with unprintable names by some persons who have demonstrated their grievances against the governor for whatever reasons best known to them. Then the question is, what do we stand to gain by overheating the body polity of our state for personal aggrandizement?
“Truth is, we don’t need to kill our brothers and sisters in the name of politics – that is not the way to go!”

Nnajiuba, however stated that constructive criticism would not be frowned at by the governor as he welcomes good and progressive advice that will made good impact in the development of the state. He said, “Governor Hope Uzodinma listens very attentively to complaints and suggestions from different quarters and he is disposed to doing the needful to drive development and economic prosperity in the state.

“Suffice to say that despite the unfounded criticisms of his person and personality, Governor Uzodinma has remained focused, firm and unwavering, a virtue rarely found among Nigerian politicians.”