Trending
You are at:Home»News»Warri-North LG Moves To Prioritize Implementation Of SDGs In Communities, As Dialogue Forum Holds In Koko 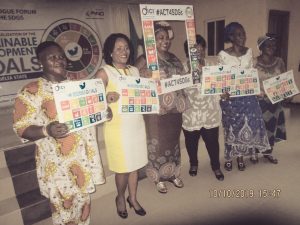 The leadership of Warri North Local Government Area (WNLGA) of Delta State, has said that practical steps would be taken to ensure unhindered implementation of the Sustainable Development Goals (SDGs) in the communities to improve the wellbeing of the people.

The HPM of WNLGA, Mr. Emilogu Amigo, made the statement, when he  represented the Executive Chairman of the Council, Hon. Aduge Okorodudu, at a 1-day dialogue forum on SDGs, held in Koko, headquarters of the Council, organised by the Developmemt Initiative for Community Impact (DICI), and sponsored by the PIND foundation.

Amigo, described the forum as a welcome development, saying it was a wakeup call for the leadership of WNLGA to do the needful in order to prioritise the implementation of the SDGs in communities. Continuing, he said that sensitisation on SDGs was a veritable tool that educates the grassroots about the objectives of the SDGs,  saying that capacity would be developed and policies put in place to achieve the SDGs across WNLGA.

Earlier, in her welcome remarks, the Coordinator of the forum and Executive Director of DICI, Mrs. Rachael Misan-Ruppee, presented an overview of the programme, even as she expressed delight at the large turnout of the participants, saying that the forum was aimed at bringing all stakeholders together, to discuss the challenges in the implementation of the SDGS in WNLGA, with a view to  advancing localisation of the SDGs in Delta State. 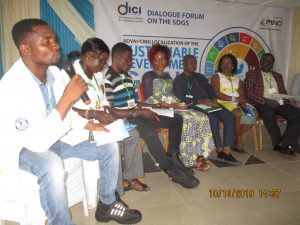 Panelists discussing a point at the dialogue forum

Ambassador Caroline Usikpedo, Executive Director, Noble Delta Women for Peace and Development, gave an  elaborate presentation on the SDGS, chronicling the eventful moments that influenced the conception and adoption of the SDGS’ agenda in 2015.

Continuing, Usikpedo, who doubles as Special Assistant to Governor Ifeanyi Okowa on Youth Development, tutored the enthusiastic participants on the SDGs 2030 agenda, anchored on 17 prioritised developmental concerns, envisioning a world in which no one is left behind, irrespective of their social, political and cultural status. She stated that people, planet, peace, prosperity and partnership (5ps) are central in the implementation of the SDGs. Usikpedo acknowledged the recurring challenges halting implementation of the goals in the contemporary Nigerian society, even as she emphasized strongly the collective role of every individual, coorporate entities, CSOs, market women, NGOs, community leaders, and communities in WNLGA, in driving the SDGs to a commendable height.

“The participation of all sectors of society including civil society organisations (CSOs), the private sector and the general public at the local level is germane in achieving the SDGs. This is quite compelling because it is obvious that governments alone cannot achieve the SDGs agenda across the grassroots,” she said.

The participants described the forum as a welcome development, saying that the ambiguity and misconception that shrouded the SDGs has been cleared. They commended the organisers of the forum for raising awareness about the SDGs, noting that it would  prod the state and local governments, including the communities and individuals to play active role in promoting and implementing the SDGs to enhance wellbeing of the people. 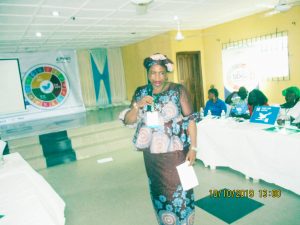 The coordinator of the dialogue forum, Mrs. Rachael Misan-Ruppee, speaking to the participants

While articulating the developmental challenges in the communities in WNLGA, the participants noted that the implementation of the SDGS was nonexistent, adding that the socioeconomic wellbeing of the people is in bad shape.

Mr. Godspower Ipopo, expressed concern about the adverse effect of gas flaring on the health of people of Egbema-Gbaramatu kingdom, saying that inability of successive governments to end gas flaring has dealt a terrible blow to the health of the people over the years. He called on the government and the oil companies to put an end to gas flaring, stating that implementation of the SDGs would ameliorate the suffering of the oil bearing communities.

In the same vein, Mr. Beecroft Uliyemi, lamented the absence of descent living homes in the coastal communities, stressing that land reclamation is paramount to provide comfortable homes for the people, even as it would address the perennial flooding of the communities in WNLGA.

Similarly, Mr. Johnson Bodor, NULGE Chairman, WNLGA, spotlighted the need for quality education for the people, even as he attributed the poor knowledge of the SDGs in WNLGA to lack of education and access to information. In another vein, some of the participants blamed the slow pace of implementation of SDGs in WNLGA on government’s apathy towards practical policies to promote and implement SDGs. 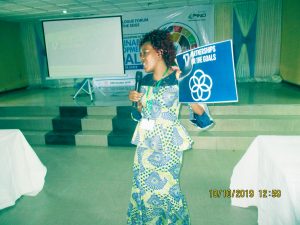 Ambassador Caroline Usikpedo, doing a presentation at the forum

Speaking at the event, Mr. John Ofofo, SDGS desk officer at WNLGA, expressed disgust at the developmental challenges communities in the local government area are contending with, noting that committed efforts made in the past years to attract attention of the oil companies to the urgent need of sustainable city and communities in WNLGA were to no avail, even as he noted that successive governments had not taken critical steps to tackle the environmental and socioeconomic challenges in the communities over time.

Roli Omeresan of the Itsekiri Regional Development Council (IRDC), decried the deplorable state of infrastructure in the oil bearing communities, citing abandoned projects as common sight in some coastal communities in WNLGA.

The highpoint of the event was presentation of action plans by the participants to drive sustainable development goals in Warri North Local Government Area. 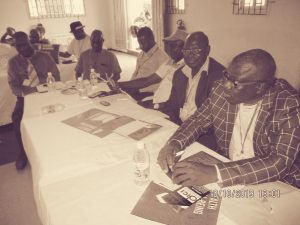 Senior personnel of WNLGA at the dialogue forum 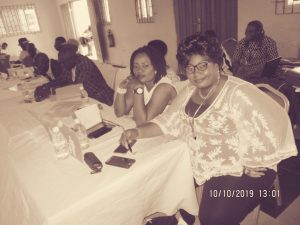